C3.ai had a spectacular debut in the public market on Wednesday. The artificial intelligence software company priced an offering of 15.5 million shares at $42 a share, above the expected range of $36 to $38 a share, before opening at $100. The stock closed its first day at $92.49, a 120% gain from its IPO price.

Among other things, the IPO marks the return to public view of Tom Siebel, the founder and CEO of C3.ai. The legendary software entrepreneur was an early executive at Oracle and the founder of the customer relationship management software pioneer Siebel Systems, which he sold to Oracle for $5.86 billion in 2006.

We caught up with Siebel on listing day for an insightful chat about C3.ai, the outlook for artificial intelligence software and assorted other topics. An edited transcript of our conversation can be found below:

Barron’s: Hey, Tom. Looks like C3.ai is off to a spectacular start as a public company.

Tom Siebel: I am not competent to comment on the behavior of equity markets. It’s not my field. To the extent I have any expertise, it’s in building and operating software companies. That said, the big picture is we have a huge addressable market, and the investment community recognizes there is a huge market in commercial and industrial AI applications. We’re looking at a $250 billion addressable software market—that’s bigger than a bread box.

And how are you going after it?

We spent the last decade building out a really remarkable software platform, called the C3 AI Suite, that represents 1,000 man-years of software engineering work. It is a cohesive set of software services that allows our customers to rapidly and successfully design, develop, provision, and operate enterprise and commercial AI applications, at small, medium and large scale.

You so far have a relatively smaller number of very large customers.

The Phase 1 strategy, yes, did involve customer concentration. We wanted to focus on “lighthouse” customers— Shell, Enel, ENGIE, Koch, the United States Air Force, Philips Medical—in multiple industries, multiple geographies and multiple use cases, and demonstrate that the product could be applied successfully to solve complex AI problems, that delivered substantial economic value in a short period of time. And we did that.

The next phase is about scaling the business, not only selling to global juggernauts but also to middle-sized companies, selling to divisions and departments of large companies; in banking, in telecom, in financial services, and in manufacturing and aerospace; in Asia, Europe, North America. That’s the phase we’re entering now. I would argue we have clear technology leadership in this space. I’m unaware of anyone who has built a successful AI platform like we have. If we succeed at that objective, establishing a market position in enterprise AI, this will be a large and hugely successful enterprise application software company. And we’ll build a company that is structurally profitable and cash flow positive.

How should people think about what you do? Are you more an application developer or a platform for clients to build their own applications, or are you building custom applications?

Unfortunately, the answer to that question is yes. About 86% of our revenue is software- as-a-service recurring revenue. Today, 65% of that is from applications. We have a family of applications for banking, like anti-money laundering, cash management, credit approval, broker rule compliance. Or applications for utilities, like distributed energy resource management, AI-based predictive maintenance, smart grid analytics. We have a family of applications for oil and gas, and for aerospace. So today 65% of our software revenue comes from those applications, and 35% comes from the platform. We sell both. Shell has 200 projects they’re building on top of our platform. Enel has 150. I suspect in a steady state, license revenue will be around 60% for applications, and 40% platform.

And what about services?

Services is about 14% of overall business and will stay there. We’ll prevent it from getting larger by partnering with IBM Global Services and others. If we let it get larger, we’ll get valued as a services business, which as you know carry lower valuations.

Microsoft took a $50 million stake in C3.ai at the IPO price. What’s the story there?

That investment had nothing to do with them making money. We have a huge partnership with these guys. Our technology is entirely complementary to Azure. I’m working on hundreds of millions of dollars of sales opportunities with the Microsoft sales organization.

And you announced a deal with them recently in a very familiar area for you.

We announced a partnership with Microsoft and Adobe, to take the Microsoft CRM stack, the Adobe marketing automation stack, and the C3.ai stack, and bring to market an entirely [new] family of applications—believe it or not—in AI-enabled CRM [customer relationship management] software.

CRM, of course, was what Siebel Systems did.

So what’s old is new again. It’s not unusual when I’m working with these large customers—who often were huge Siebel Systems customers—that as we’re deploying our 12th AI application, they say, hey Tom, when are you going to do AI-enabled CRM. We’ve developed those solutions in combination with Microsoft and Adobe, and all three organizations will be selling those worldwide. So the symbolism of that Microsoft investment was not about making money—it was about sending signal to the market and to their own employee base that, hey, this is an important market, pay attention.

Who are your competitors?

When we were doing database software at Oracle in the ‘80s, the competition was companies building their own relational database systems. Who succeeded at that? No one. When we brought ERP systems and CRM systems to market in the 90s, the competition was the customer going to build their own. Who succeeded at building their own ERP system, name the company? Nobody did. They all would end up buying from Oracle, or SAP, or Siebel or somebody else. So it is not unusual—this is standard in the business—that when you get into a new market, the knee-jerk reaction of the CIO is to build it himself. Or, to pay Accenture $500 million to help them build it.

So the competition is from homegrown systems.

Virtually every one of our customers has tried one, two, three times to build it themselves. What they’ll do is use componentry from Snowflake (SNOW), Databricks, Datastax, H2O.ai and DataRobot, and they’ll attempt to assemble all of these things together into a cohesive whole that does something useful. Unfortunately, it is an impossible problem, and to my knowledge no one has ever succeeded at doing it. General Electric (GE) spent like $6 billion over a number of years trying to do this before they folded their tent.

I’m not saying that these products from companies like Databricks or Snowflake have no value. They have very high value.

You can think of what we’ve done—and I know this is hard to believe—is to take the functionality of every software company that’s involved in AI, aside from the cloud, take Palantir, Databricks, DataRobot, H2O, Snowflake, and built all of it into one cohesive architecture. What Palantir does as a company is a feature for us. What H2O and DataRobot do is something called auto ML [machine learning]. That’s a feature. What Alteryx does is a feature within our product; we call it Ex Machina.

So wait, don’t you compete with all of them?

If one of our customers wants to use one of these things—and every company does— because they’ve standardized on it, or somebody thinks it is technically superior to our solution, it doesn’t matter, they can use it. If Shell wants to use DataRobot instead of our auto ML capability, God bless them, it’s fine. If they want to use Databricks, they do—and by the way, they do use Databricks, instead of our data virtualization technology. They don’t have to lose for me to win. We really don’t compete with those guys.

A few years ago, you changed the company’s name, from C3 IoT to C3.ai. Tell me about that.

There was a time period, in 2016 and 2017, when the internet of Things was all the rage, and all anyone wanted to talk about was connecting devices. And we do that. So that was probably a mistake to name the company that. Now, for instance we read data from 57 million sensors and 42 million smart meters. Really what we’re doing with the data is predictive analytics. We’re doing AI. I got to a point where 100% of our applications were predictive analytics and AI and 30% of that was IoT. So the first 20 minutes of every presentation was explaining that we were not really an IoT company. It wasn’t a change in the business, we were confusing the market with the name. It was a mistake. AI happens to be what we really do.

Tom, you guys were growing 70% in the April 2020 fiscal year, and dropped to 10% growth in the last six months. What’s the story there?

In the February, March, April, May time period, we hit a speed bump the size of the Empire State Building. It was not a business cycle issue. This [the pandemic] was an act of God. It was apocalyptic. Business came to a screeching halt. Our revenue continued to grow, because we have a backlog, but it grew at a slower rate. But once you got to July, August, September, with what’s happening in digital transformation and AI, it’s blowing and going. Our pipeline is growing at a greater rate than it ever has grown. Coming out of this, you will see a company growing not at 70% or 80%, ain’t no way no how, but we’ll be growing in the top decile of software companies. 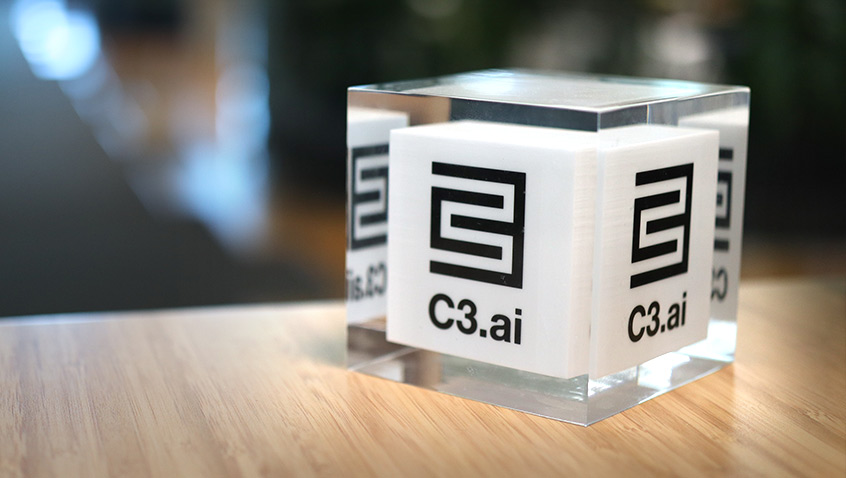 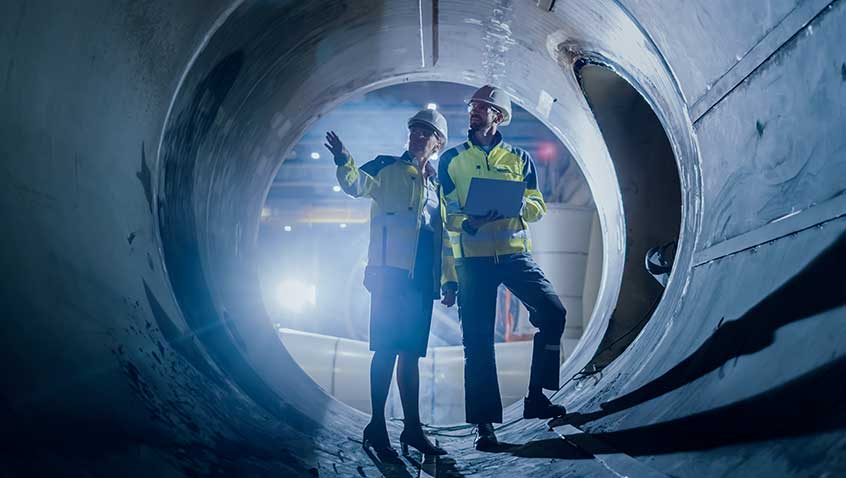