Tom Siebel’s Warning to the World

Tom Siebel’s Warning to the World

Two types of leaders exist in Silicon Valley: those who studied computer science and engineering‚ and those who dropped out of school. Tom Siebel‚ the father of Customer Relationship Management (CRM) software‚ belongs to the group of high-tech billionaires that studied. In Siebel’s case‚ he also studied history. He is still interested in historical topics today. Perhaps this is why he‚ unlike many other Silicon Valley tech experts‚ not only praises the advantages of technology‚ but understands its dangers.

“History tells us that every technology has done a lot of good but has also produced evil. Whether it’s Gutenberg’s printing press or Watt’s steam engine‚ these achievements have ultimately promoted wars‚” said Siebel. “Russian President Vladimir Putin is said to have stated that anyone who takes the lead in artificial intelligence will rule the world. Putin is right‚” he explained.

Unlike others in Silicon Valley‚ Siebel maintains cooperation with the military is important‚ including C3.ai’s programs to help the US Air Force maintain its fighter jets more effectively. “We’re still living in the shadow of World War II‚ even though younger people may not want to admit it‚” he said. Siebel questioned why some US companies don’t want to cooperate with the Pentagon‚ but at the same time are cooperating with China on Artificial Intelligence.

Siebel also explains why C3.ai has not yet done business in China—state-sanctioned IP theft—and his stance on social media‚ including Facebook’s apparent downplaying of the influence of Russian propaganda. “History won’t look back mercifully on social networks‚” he predicts. “They must be regulated before they destroy the roots of our freedom and democracy.” You don’t need to study history to realize that. 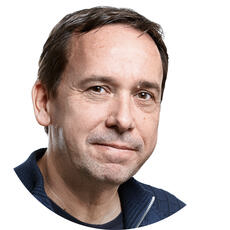